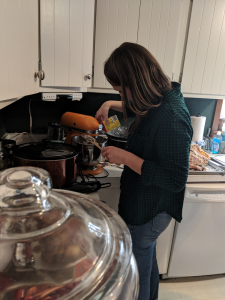 At some point, my Mother would let my daughters “help” her with the mashed potatoes every Thanksgiving and Christmas. As with most small children, the word “help” was used in a very loose sense of the word.

I’m not certain at what age the tradition started, but they were fairly small and over time went from just doing a little “mixing”  and “helping” at the end to doing more and more of the actual prep every year. Mom always put cream in her mashed potatoes and that’s what my daughter is doing in this picture.

Sometime before my daughter was really on her own, my mother bought her a mixer. It’s the one shown in the picture. At that point, Mom was already ill and I’m pretty certain she wanted to give it to her before she passed. Personally I thought orange was a somewhat unusual color, but I managed to keep my opinion about that to myself. I understood the symbolism of the mixer, what it meant to my mother and what it would hopefully mean to my daughter.

My daughter and her husband moved into a house of their own. We helped them to move. I put the mixer in the back of my daughter’s car to move it. I remembered thinking to myself “do not drop the damned thing.” I wasn’t cursing the mixer, but rather giving myself a stern lecture to be careful with it. As I carried it into their new home, I felt it slip ever so slightly as I walked in the back door. Fortunately the slip was either minimal or entirely in my mind. The mixer was safely ensconced on the counter.

A few weeks later we were unable to find the potato masher the day after Thanksgiving. We made do with the mixer instead. Someone’s father and someone else’s son probably hastily and inadvertently hid the potato masher.

That was fine. The mixer did the trick. Mom was there in spirit and someone got a nice picture and memory in the process.