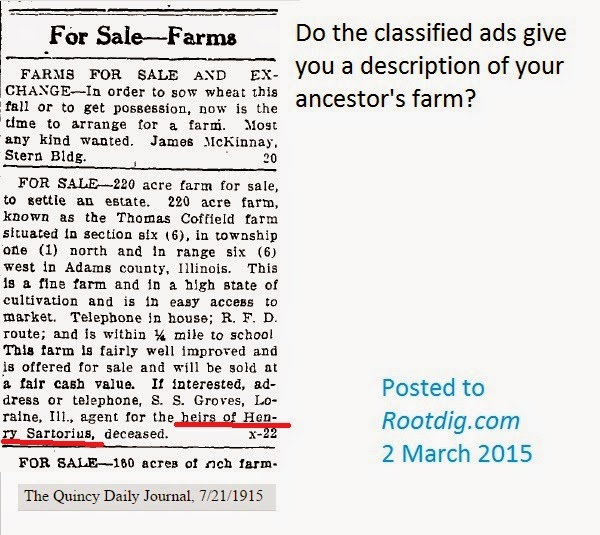 The classified ads in a newspaper can provide more clues about something than simply who was selling what and when.

This 1915 advertisement from Quincy, Illinois’ Daily Journal contains a “for sale” notice for a farm owned by my ancestor, Henry Sartorius.

I don’t know just from this advertisement whether Henry lived on the farm at the time of his death or not and I don’t know how long he owned it.

County land records would tell me when the farm was purchased, but it’s not going to tell me whether or not Henry actually lived there. Henry was for the time fairly well-set financially (we will see this in a future post) and it’s possible that the farm was purchased for a son or son-in-law to operate. The property may or may not have been purchased from Thomas Coffield as farm names sometimes tend to hang around–sometimes after several others have owned the property.

The property is in section 6 of Camp Point Township–a slight distance from where Henry lived for most of his time in Adams County. Henry lived in Northeast Township in 1910 and had lived there sometime before that. Of course that length of residence elsewhere doesn’t mean he wasn’t living in Camp Point Township at the time of his death. Henry’s death certificate would indicate his residence at the time of his death and the “heirs of Henry Sartorius” indicates that this sale was being transacted after his death.

The house did have a telephone, was on a rural mail route and was within 1/4 mile of a school. Apparently in 1915 those were advantages to be had in rural Adams County.