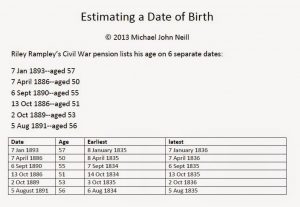 Ages given in any document can easily be incorrect. That doesn’t mean they should not be analyzed.

The Civil War pension for Riley Rampley provides six ages for him at different times. I was curious just how consistent these ages were.

The six ages provided in the pension application are shown on the chart. The dates on which the ages were given range from 1886 through 1893.

Those ages were used to create a range of birth dates for each age. Then to see how consistent the birth date ranges were a timeline was created. The ages were not entirely consistent, but they were relatively close. Given that ages can easily be off by a year or two in any given record, this is not a surprise.

All of the ages given are consistent with a date of birth between July and October of 1835. That’s not a wide range of dates. Riley’s “known” date of birth of 25 August 1835 falls within that range.

Ages given for individuals will not always be consistent, but if you’ve got a person with varying ages such an analysis may be helpful in reaching a conclusion about when they probably were born. 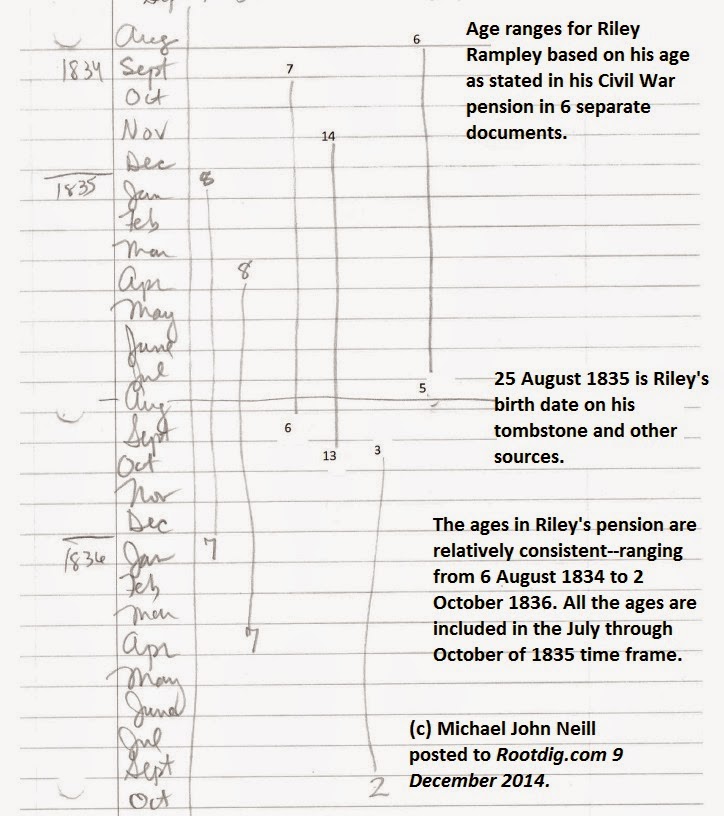 And it may also help you to determine if one age is so far off from the others that it might have been a clear error.

The assumptions I made in this analysis were that:

It’s always a good idea to write down your assumptions when doing any analysis. You can’t know which assumptions may not be valid later if you’ve not listed them.