One would think that ThruLines would at least be consistent in presenting a lineage. 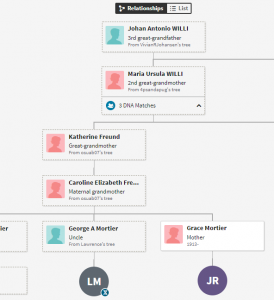 That thought would be wrong.

As an experiment, the family tree attached to a set of test results only included the name of the mother of the testee (Grace [Mortier] Johnson, born in 1913 in Rock Island County, Illinois). ThruLines(tm) constructed a pedigree for Grace that was consistent with known information on most of her ancestral lines.

Until I looked at the purported ancestors of Grace’s ancestor, Maria Ursula (Willi) Cawiezell (1823-1893 Davenport, Scott County, Iowa). That was when I saw a problem. ThruLines(tm) had different lineages for Maria. I looked at the “potential ancestors” for Maria in her “paternal”  line at ThruLines(tm). Maria’s father was either: 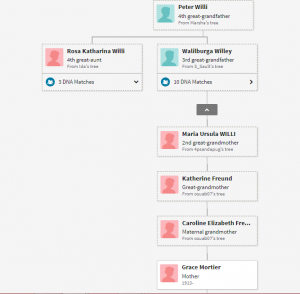 Based upon the DNA, immigration patterns, and the actual records that have been located, there is significant support for Johan as the father of Maria. The trees that are used as the source for Johan in ThruLines(tm) do list Maria as a daughter. That is not evidence by itself, but at least I can see where ThruLines(tm) got the relationship.

I can’t see that for Walliburga. Usually in ThruLines(tm) trees, relationships are at least pulled from one tree. It would make more sense if the “trees” at ThruLines(tm) had a consistent suggestion for Maria’s father.

One more reason to use these trees as a clue. One more reminder that they are created based upon an algorithm–“programmed intelligence” and “programmed reasoning.” And that’s the problem.

I still think that ThruLines(tm) has the potential to help users with the broad initial sort of their DNA results. But the information needs to be used with care and users need to use it with their eyes wide open and their brain turned on.  This is one more instance of “stitching” where the thread and the needle are apparently on different surfaces–perhaps even different rooms.

Our earlier posts on ThruLines(tm):

As always, readers are free to use or not use things we write about. But using them without some knowledge is the problem. That’s one we want readers to avoid and why we mention the negative.

Note: Some readers will “get” the title to this post. Those who do have a little bit in common with me. And if you don’t get it, it is ok–really it is. Sometimes my humor is over-rated.

Find out more about my “ThruLines”(tm) webinar.