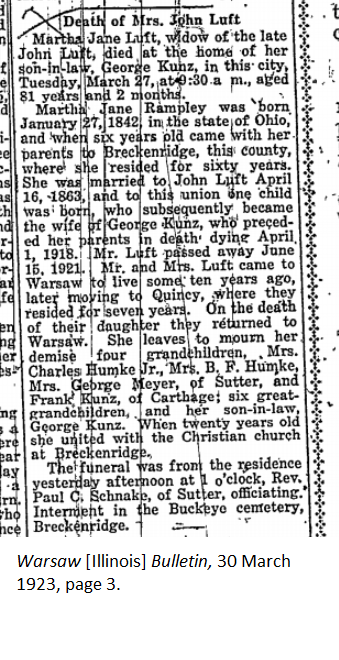 The obituary of Martha Jane Luft from the Warsaw Bulletin in March of 1923 mentions her daughter Maria twice–never by name. Martha’s son-in-law, George Kunz, is mentioned twice as well. The failure to mention the daughter by her first name is indicative of the time. Maria’s date of death is listed in her mother Martha’s obituary and all of Maria’s apparent children are listed as Martha’s grandchildren in the obituary.

The obituary of John Luft from 24 June 1921’s Warsaw Bulletin does not mention their daughter by name either, but does state:

In 1863 he was united in marriage to Martha Jane Rampley, daughter of Mr. and Mrs. James Rampley, and to them one daughter was born, who became the wife of George Kunz. She preceded her father in death three years.

Interesting that Martha’s obituary does not provide any names for her parents but her husband John’s obituary does. In a way this is actually a good thing if I contemplate the likely informant for a minute.

In this case, there are plenty of other records that provide information on Martha’s parents–but this was a nice little thought exercise to keep the mind thinking when the records are not available.

And fortunately I already had the daughter’s name. It’s frustrating when people are not named explicitly as Maria is not in this case. But it’s worth remembering:

everyone who was familiar with the family knew Maria’s name–it wasn’t news to them.

And aren’t newspapers about news?