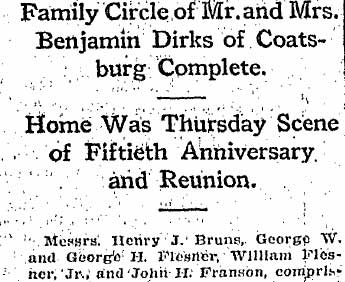 This is part of a newspaper article that appeared in one of the Quincy, Illinois, newspapers after my great-great-great-grandparents celebrated their 50th anniversary in Coatsburg, Adams County, Illinois in 1856.

Interestingly enough, the article did not mention any of the children by name, but did name the men who provided the musical entertainment.

Had I not had it, the announcement provided the couple’s date and place of marriage in Quincy, Adams County, Illinois.

I will have to search again for this ancestor in the newspapers. His actual name was Bernard, which usually got shortened to Ben. I had not searched for Benjamin when doing name searches of these newspapers at the Quincy Illinois Public Library website.

What likely happened is that the name was written as “Ben” and someone decided that any whose name was Ben must have really been named Benjamin.