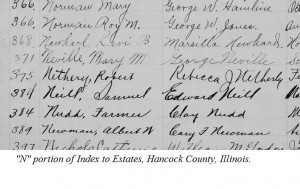 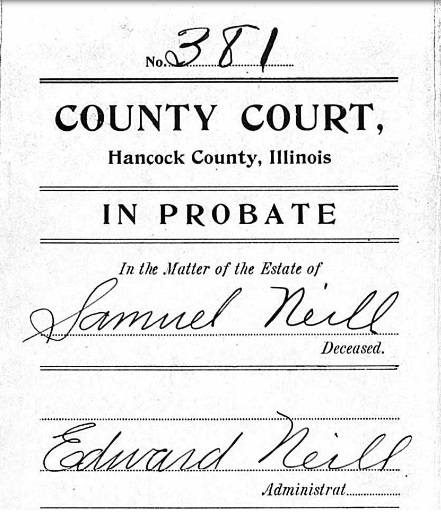 I looked for it so many times I was nearly blue in the face. The index to estates for Hancock County, Illinois, indicated that the estate packet of Samuel Neill who died in 1912 was in box 384.  I went through the contents of box 384 more times than I could remember, hoping to find the estate packet.

It was not to be found. I tried box 383 and box 385, hoping that maybe it had been filed in an earlier box. Instead of going through additional boxes, I decided to use the various probate journals to find transcribed copies of what would be most of the documents in the file.

It was later that I learned that there had been something of a court battle over the guardianship for one of Samuel’s grandchildren (the son of a child who predeceased Samuel) while Samuel’s estate was still being probated.

I concluded that the estate packet of Samuel had been pulled by someone during that guardianship action and that Samuel’s estate packet was laying in some office somewhere in the back of some file. Or worse yet, had been thrown out what a lawyer handling the guardianship had died.

And then I performed a search for probates with the last name of Neill with a keyword of “hancock” in the Illinois, Wills and Probate Records, 1772-1999 at Ancestry.com. The intent of the search was really to see if there were records for any other Neills that I had simply not looked at.

And there popped up an estate for Samuel Neill. It couldn’t be for the Samuel Neill who died in 1912. it had to be for his son with the same name.

But it wasn’t. It was the estate packet for Samuel Neill–the one who died in 1912.

It appeared in Ancestry.com’s index–and was actually filed in box 381, not 384. Looking back at the index entry I immediately saw that the number could have been 381 and not 384. But the number looked a lot like the entry below it, so I assumed it was right. And I had looked in the index and case box so many times that I never bothered to look again.

But there it was in Box 381. Fortunately Ancestry.com indexed it correctly in  Illinois, Wills and Probate Records, 1772-1999.

Of course now the next time I’m back at the courthouse, I’m going to look in box 381 myself so I can look at the actual records.

And I should have thought to look in Box 381 myself. But my original searching into Samuel’s probate was when I was probably 14 or 15 years old and such things didn’t occur to me.

But I’m glad Ancestry.com got this one right–it might make up for the ones that they didn’t.