[note: this article originally appeared in the Ancestry.com Daily News  on 8 August 2004. In the interest of being readable, we’re not including citations throughout this piece–Riley served in Company D of the 78th Illinois Volunteer Infantry.]

While I doubt that it is the largest Civil War pension file in the National Archives, the two-inch file that made its way to my mailbox for my ancestor Riley Rampley contained far more paper and information than I ever expected.

The size of the file had little do to with Riley’s actual service. He served for approximately three years and was mustered out in June of 1865 after the close of the war. Riley‘s military career was not significantly different from the other men in his unit. He never rose above the rank of private and received no special commendations. Yet his pension claim was full of testimony from his comrades and relatives attesting to his military service, his medical state, and the condition of his farm after his demise. His widow’s difficulty in getting approved for a pension resulted in the volume of paperwork in the file. Ironically I almost did not request the pension file because I thought I knew everything about the family. I was wrong. While I did know many genealogical facts for Riley and for his parents, I learned a great deal about Riley’s family by reading the material in his file.

One date is missing: his date of birth.

Three careful reads of the entire file did not locate one reference to his date of birth. The omission was not an oversight; it just was not necessary. Riley’s initial pension claim was based upon his disability and not his age. His widow Nancy’s later claims were based upon his disability and her need, not Riley’s age. Consequently Riley’s date of birth does not appear in the set of papers because it was not needed to process his claim. There are clues. Several doctor’s examinations and affidavits signed by Riley provide his age as of a specific date:

It is hoped that these ages will allow us to backtrack into an approximate date of birth for Riley. We will analyze the first age and date in detail and use that analysis to calculate similar ranges of dates of birth from the last five ages given for Riley.

Every other possible age would fall between one of these two extremes.

As a result, each age on a specific date implies a range of possible dates of birth (assuming the ages are always correct). Using the six ages listed above, the following ranges for dates of birth are obtained:

I need to see where these date ranges overlap. To analyze these dates and more easily see if they were consistent, I created a crude chart. Had all the ages been consistent, there would have been a time period common to all that included Riley’s actual date of birth. The problem in this case is that the ages were not consistent. This was easily seen on the chart that illustrates this post. 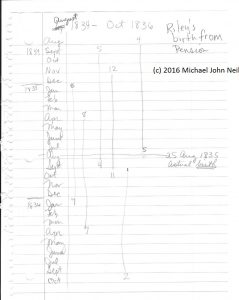 The first four date ranges all include a time period from 8 April 1835 through 4 Sept 1835. However, neither of the last two ages infer dates in that range. Based solely upon the ages in the pension file, I would feel confident saying that Riley was probably born in 1835 as every age infers at least three months in that year. Maybe the next time I perform this analysis the ages will be consistent.

When the references are connected, we realize that William Newman was the father of Nancy and that he was living in Hickory Ridge, Hancock County, Illinois, at the time of the marriage. If the references are analyzed separately this connection may be overlooked. As we will see in an upcoming column, there was much more to Nancy’s widow’s application than simply proving her marriage to Riley.

Are You Sick or Whining?
Riley’s application for a pension based upon disability was finally approved, but it was necessary for him to:
– Submit testimony from comrades to testify to his service and health.
– Submit testimony from neighbors who had known Riley before and after his military service.
– Undergo physicals to demonstrate his health

Two of Riley’s comrades submitted letters in support of his claim for a pension in the late 1880s. These letters provide details about Riley’s service not obtained in other sources. Eli Short in a June 1889 letter states in part:

“[Riley] was a soldier Loyal and True to the Flag…he and I was messmates the last year of the war…I saw the said Riley…helping to run a Thrasher [in 1865 or 1866] at his fathers and if my memory serves…he was complaining of not being able to stand the heat…I can say that he is a premature old man…[and was] injured in the war.”

Of course, the letter was trying to address Riley’s claims that he had been permanently disabled due to sunstroke suffered near Atlanta in the summer of 1864. Short’s handwritten letter also indicates that Riley’s father (unnamed unfortunately) was living in 1865 or 1866, apparently near Riley. Had the death date and residence of Riley’s father not been known this would have been a significant clue.

Wilford Manlove states in an undated affidavit from 1889:

“He was with him [Riley Rampley] on the 28th day of July 1864 on an expedition to Sisters Ferry, Georgia, when said Riley Rampley received a sunstroke.”

The USGS GNIS (United States Geological Server Geographic Names Information Server easily located Sister’s Ferry, Georgia, which is on the Savannah River sandwiched between Effingham County, Georgia, and Jasper County, South Carolina. The GNIS also contained links to various contemporary maps of the area as well. The map will be a nice addition to all the pension papers.

Not all of the testimony was from military comrades. Neighbor Richard Stringer states in a short letter from 1889:

The Doctor Says…
Riley was examined by doctors on separate occasions in 1886, 1889, and 1891. In the interest of space we will only comment that Riley shrunk one inch from 1886 to 1891 and gained 5 pounds in that same time. In 1891, the doctors commented that he was of “fair” intelligence and had a “normal” brain. I was very comforted to learn these two facts.

Riley received his pension. His last monthly check from early 1893 was for a whopping $4.