This 1766 request was made by Mary Brown for her “third” in the estate of her late husband, Amos 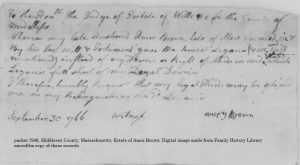 Brown. Amos had left his wife several legacies in his 1766 will, but the amount was less than her right of dower or one-third. Apparently sick in 1766, Amos Brown of Stow, Massachusetts, wrote his will and a codicil in May of 1766 and was deceased by September 30 of that same year.

This post really isn’t about Amos Brown. It’s about Mary.

Mary is one of several ancestors who I “lose” after their husband dies. That may partially be because my research on her is incomplete. It’s also partially because I have not had much time to devote to Mary thus far and the commonality of her name makes her somewhat more difficult to adequately distinguish from other women of the same name.

It can be easy to “lose” female ancestors after their husbands simply because there are fewer records on women. Sometimes we lose females because they marry again after the death of a husband and we never bother to check marriage records because we incorrectly assume they would not have remarried. Often we lose these women because we fail to completely research the entire family. There may be clues in later records of her children that suggest a time frame in which she died.

Amos Brown was actually Mary’s second husband. Her first husband, Ephraim Puffer, died at a relatively young age in Middlesex County, Massachusetts, leaving Mary with several children. She is styled as Mary Brown in the will of her father, Joseph Daby, who died in 1767 in Middlesex County. Daby also mentions his Puffer grandchildren in his will and refers to their deceased father by name. In this case, the will was my initial indication that Joseph’s daughter Mary had married again.

Remarriage can be a reason why we fail to locate a tombstone for a female ancestor if they are buried with a subsequent husband that is unknown to us.

One should never assume that a surviving spouse does not remarry.