Nicknames and diminutives can frustrate genealogists. Adolphena Katherine Trautvetter is one of those individuals. As we’ve seen in earlier postings, she went by Kate early in her life and Pheeny later in her life.

Apparently the executor of her grandmother’s estate in 1903 thought she had an additional nickname-Addie. 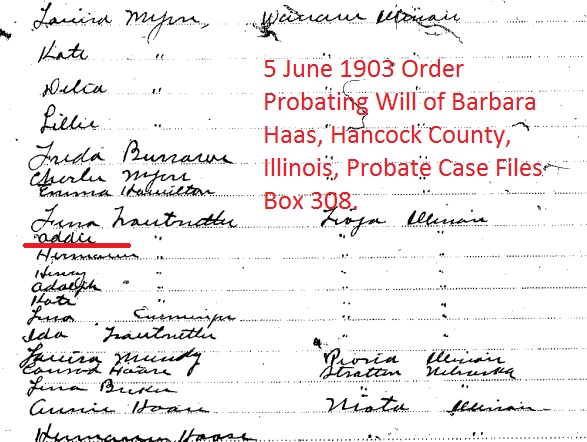 The other Trautvetters listed in the illustration are all Addie’s siblings and grandchildren of the woman whose estate is being settled. From other sources, it is clearly known there were seven Trautvetter siblings who were alive in 1903 and there’s no other Trautvetter who would have been an heir and had an interest in Barbara Haase’s estate.

So why are eight Trautvetters listed?

Addie (Adolphena) Trautvetter had to be given notice because she was an heir. Addie has to be referring to Adolphena as there’s no other female Trautvetter sibling whose name would have had Addie as a diminutive.

How were the two notices handled?

One would have to ask the postmaster in Tioga.  My guess is they both went to Adolphena Katherine Trautvetter.