It’s a lovely picture of the military service stone on the grave of Claude Sartorius near Peoria, Illinois. I’m appreciative to the FindAGrave  contributor who took it and who graciously gave me permission to use the image of the stone in this post. 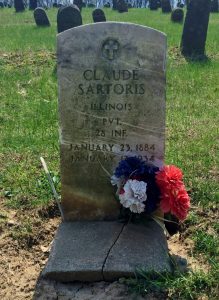 Other military markers can be seen in the background, but many of the graves in this cemetery have nameless stones with only numbers.

After his mother’s death in 1926, Claude Sartorius was in and out of several veteran’s hospitals (including ones in Danville, Illinois, Dayton, Ohio, and Johnson City, Tennessee) until he died at the Peoria State Hospital in Bartonville, Illinois, in 1934.

For reasons that are unknown, Claude was buried on the grounds of the hospital and not interred with his parents at the cemetery west of Golden, Adams County, Illinois.  The marker on his grave was added in 1947 at the request of the hospital. I’m fortunate that this was done or his grave would have been unmarked.