It is easy to see how this 1875 Nebraska State Census entry was overlooked when one only searched for Emmar Oades. Ancestry.com indexed it as Emma Oder. A comparison with the “r” at the end of the name of Snyder makes it clear the terminal letter is not an “r.”

She was easily located using a wildcard sea 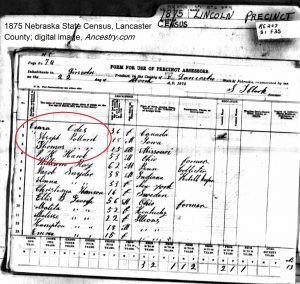 rch (Emm* Ode*), but this is not the only way she could have been located. Her two sons, Joseph and Thomas Pollard are living with her and were easy to locate as their names did not present any transcription difficulties.

This 1875 Nebraska State Census does not provide any marital status, but Emmar and her third husband, Joseph Oades, were no longer living together at the time of their enumeration. At this point, records of their divorce are still being obtained.

It is not clear how many families are shown on the enumeration page. The heading for the name column states:

The name of every person whose place of abode on the first day of March, 1785, was in this family.

This seems to indicate that there’s one page per physical household. Emmar could very easily be living in some type of boarding house with her children given that she was a single mother living in Lincoln, Nebraska, in 1875. Several of the sheets for adjacent “households” also seemed to include more than one family–sometimes with several single people as well and sometimes not. It could be that the section of Lincoln where Emmar lived had several boarding houses in close proximity to each other.

I need to do a little more looking to see if I can find out for certain what the instructions were for the enumerator for this column.  The column heading seems to be fairly clear.

It also seems to indicate that Emmar cannot read. However that entry could have been smudged out after the fact in an attempt to correct an error on the part of the enumerator. My transcription of the entry should indicate that.