The hints at Ancestry.com should be used as hints and not as facts. Matching names do not mean matching people. Sometimes it is relatively easy to see that a “match” is not really a “match.” 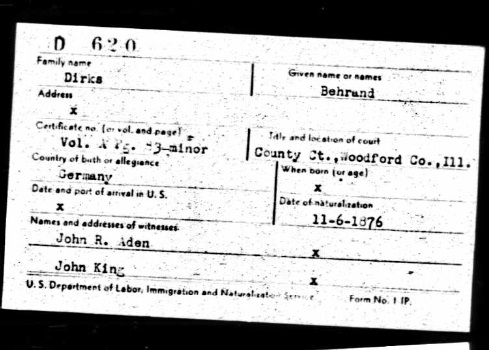 The image in this post  is one that Ancestry.com suggests for my Bernard Dirks.

My Bernard Dirks is in the United States Census as follows:

Farmers sometimes don’t move around too much once they pick a location. Once Bernard and his wife, Heipke (Mueller) Dirks, settled on a farm in Honey Creek Township shortly after their 1856 marriage in Adams County, Illinois, they stayed.

The naturalization record index from Woodford County (suggested by Ancestry.com as being my Bernard) appears to have been made from a book of minor naturalizations (based on the word “minor” which appears in the certificate number). Minor naturalizations were for those who immigrated as minors and who were allowed a different naturalization process from someone who immigrated as an adult. The Honey Creek Bernard Dirks does not appear to have immigrated as a minor. This bit of our analysis is dependent upon the index card being correct however. It should be noted that I have not seen the actual record. If I really thought this was my Bernard I would have obtained the complete record and not relied only on the index card.

The distance is also a problem. Given that the Honey Creek Bernard lived in Adams County from his 1856 marriage 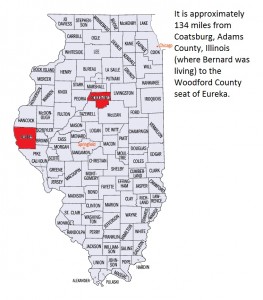 until his death after the 1910 census, it seems unusual that he would venture the approximately 134 miles to Woodford County to naturalize. It is possible, but by 1876 the Honey Creek Bernard would have been in Adams County, Illinois, for twenty years. That is long enough to have established ties and connections to the area enough that he could have found someone to witness his naturalization without travelling 134 miles to find the nearest associate to vouch for him.

Based upon what I know about my Bernard, I’m confident that the Woodford County naturalization is not the Honey Creek one. My Bernard’s consistent known residence in Adams County, his immigration as an adult,  the likelihood he didn’t wait until 1876  to naturalize, and the fact that by 1876 he probably wouldn’t have needed to travel 134 miles to find a citizen to vouch for him pretty much sums up my rationale.

If I was still uncertain a search of the 1880 census for other Bernard Dirkses might be in order.