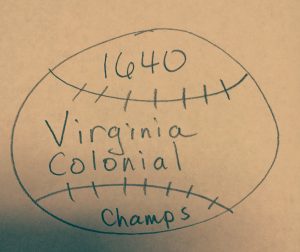 There wasn’t baseball in 1640…but we needed a homemade illustration.

We’ve mentioned “exhaustive search” several times in various posts on this blog. Generally it’s the idea that you search all records that would reasonably expect to provide information to assist in answering a specific research question. Genealogy professionals and academics espouse the “exhaustive search” as a part of the Genealogical Research Standard.

Exhaustive search does necessarily mean that you have to obtain every document that might contain the event date or location for which you are looking. It usually means getting that record that’s most likely to provide you with the best information (usually original source, primary information, reliable informant). “Most likely” and “best” are not as well-defined as some us would like, but genealogy research is full of terms that are sometimes necessarily vague. That’s part of the way in which genealogy is part art and not just science.

Many times an exhaustive search is location and time period sensitive. If I’m trying to establish the birth date for my grandmother born in Illinois in 1924, it’s probably sufficient to obtain her birth certificate. Probably–unless there’s something unusual about it. There’s another problem–I don’t know what’s unusual about a 1924 birth certificate unless I’ve seen several from that same time period. That’s another reason to research more than just a very narrow band of people.

What’s exhaustive changes when the problem is establishing a parentage in Virginia in 1640. That’s a whole different ball game from a research standpoint (a 1924 Illinois birth is usually junior high softball compared to the Major League Baseball of establishing a 1640 birth in Virginia).  Frankly it’s a time to look for everything you can on that person and their probable family. Everything. Whatever record you can get whether it could mention any detail of the birth or not

I’ve long been a proponent of when I’m really stuck to look at everything.  Even if something on that list of “everything” might not answer the particular question. Everything.

That’s how I used a 1909 christening record to establish that someone was alive in 1953. You never know what something will say until you look at it.