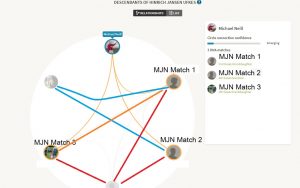 Analyzing DNA matches is part science and part art. It also takes some practice. While working with the results of a new DNA test, I’m “grossly” sorting the matches into three categories based upon the known heritage of the testee with a Chicago-born mother and a Missouri-born father. The Chicago-born mother had a father of unknown origins (due to adoption) and a mother who was native of upstate New York who came Chicago around 1900 with her father.  The Chicago-born mother met her Missouri-born husband when he came to Chicago in the 1930s looking for work. Based upon the paper pedigree, I’m sorting the matches as follows:

The sorting is based upon my goal (learning more about the mysterious grandfather) and what I do know about the heritage of the testee. That approach varies from one testee to another.

Match sorting is discussed in more detail in my AncestryDNA webinars.