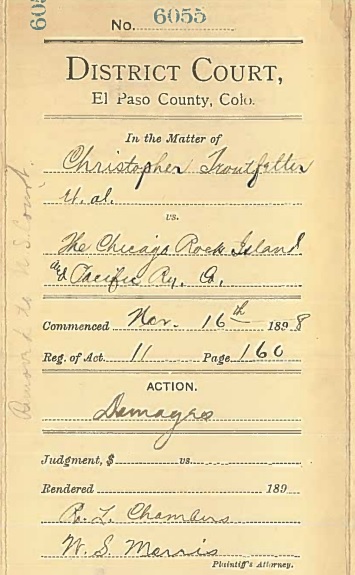 The El Paso County Court Case from 1898 arrived from the Colorado State Archives. It took the Archives a week or so to respond to my request for a price quote, but the digital copies arrived within a few hours of processing my payment.

Ordering records is always a gamble and the genealogist needs to acknowledge that and constantly remind themselves of that.

Removed to US Court

That notation explained why there was no annotation regarding how the case was settled by the El Paso County Court. It wasn’t. There’s an order of 1 December 1898 indicating that the case was being moved to the Circuit Court of the United States for the District of Colorado.

Those records are at the National Archives at Denver (NARA’s Rocky Mountain Region) in Record Group 21 (Records of District Courts of the United States). We’ve made a request for those records to see how the case was settled. In a future post we’ll see what the case was about and what records were in the case file from El Paso County. There were a few items in the packet besides the order removing the case to a federal court. Those papers confirmed who Christopher Troutfetter actually was–despite referring to him as Christopher throughout the entire set of papers.