The unexpected treasures in military pension files can be worth the time it takes to find them–most times the best finds don’t just jump out at the researcher. Details about family can be buried in what originally seems to be page after page of financial tedium.

That’s what happened in the pension application file for Gardner Ramsey. The Mexican War veteran served in a unit from Illinois, but by the 1880s had moved to the Southwest where for a time he operated a mail route in Fort Huachuca in Arizona.

Ramsey’s application for an increase in his pension was denied and a special examiner was sent to take testimony regarding Ramsey’s financial status and physical condition. In December of 1903 in Los Angeles, Mrs. Quince White made out an affidavit in support of Ramsey’s claim. Apparently Ramsey was not always to operate the mail route in Arizona by himself and two of his grandsons, Charlie McClune/McClure and George Hand, would help him. White incorrectly names the Hand who helped Ramsey. That error, made and corrected in the testimony, initially named John E. Hand as the grandson. White corrected herself and indicated that John E. Hand was George Hand’s father–thus giving the name of Ramsey’s son-in-law.

White goes on to state that Ramsey moved to Putnam County, Tennessee. She’s not certain of the year in her testimony, but believed that it was 1893. Her testimony documented Ramsey’s live in the late 1890s through the date of her testimony in 1903.

But it’s not often that affidavits in a pension file mention names of the veteran’s grandchildren. That was an unexpected find. It suggests that the boys were old enough to help with the route when their grandfather was unable to and that they lived in the same area as their grandfather Ramsey during the unstated time frame. 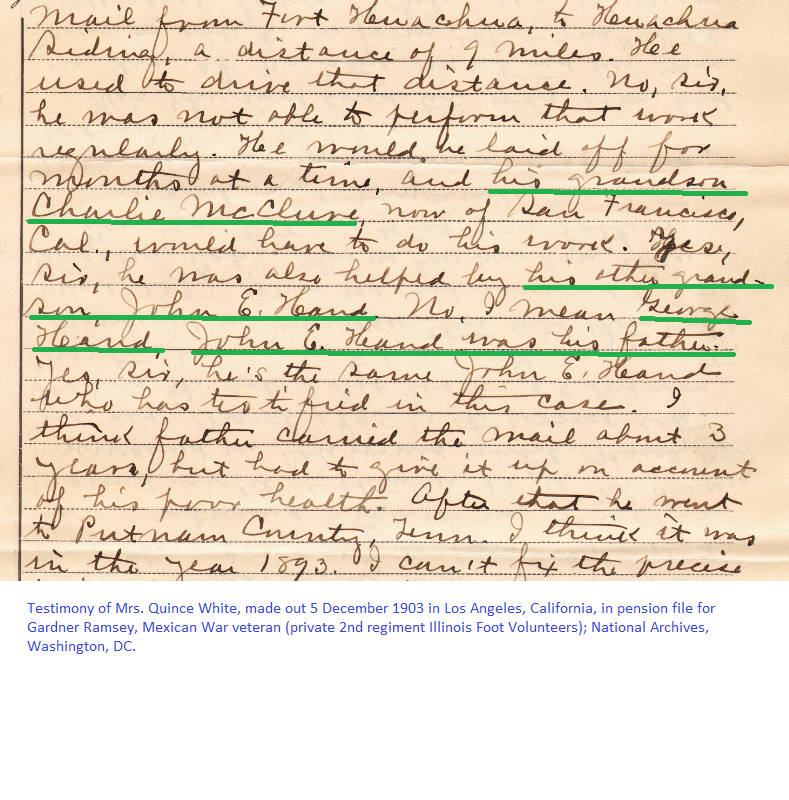