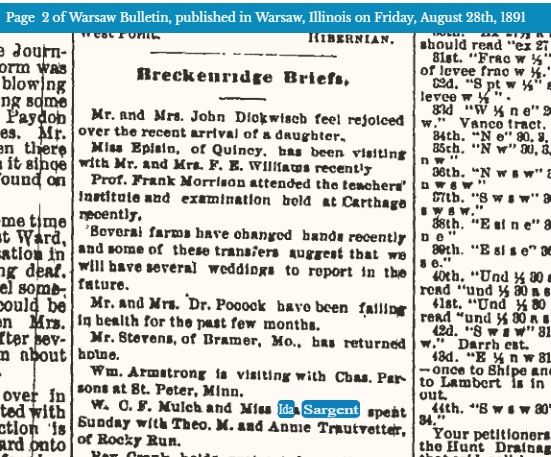 Sometimes one-liners in the newspaper can be bigger clues than you think:

The item appeared in the “Breckenridge Briefs” in the Warsaw Bulletin from Warsaw, Hancock County, Illinois, on 28 August 1891. One might be tempted to think that Mulch and Sargent were “courting” to use the word of the time and had gone to see the Trautvetters. Jumping to that initial conclusion might be reasonable, but conclusions reached too quickly or without additional research can lead to confusion. As with most things, more research needs to be done. What is known is exactly what is stated in the newspaper. Reasonable inferences would be that Mulch and Sargent (or at least one of them) lived in or were known to people in the Breckenridge area. The Trautvetters were likely husband and wife and lived in or near Rocky Run.

If I don’t know where those areas are I need to determine that as well. Sometimes determining the area covered by one of these local gossip columns can be slightly difficult as the borders are not often well-defined.

There are a few additional details that are known. Sargent was born in 1874 and by the mid-to-late 1880s was not living with her parents. Her mother “was gone” and her father couldn’t take care of her or her sister–according to family tradition. And, also according to family tradition, the “Mulches took in Ida.” That could very well be the Mulch mentioned in this reference. The Trautvetters were at least twenty years older than Ida and were, in fact, husband and wife.

The more likely scenario is that Mulch knew the Trautvetters and, for one reason or another, took the Sargent girl along for the visit.

Eight years later Ida Sargent would marry a nephew of the Trautvetters.

That may have had nothing to do with this visit either.

But I do have a clue as to who raised my great-grandmother as this newspaper items gives me a potential name to work with. I need to find him in census records to determine his age and learn other details about him. Given the time frame, Sargent is not enumerated with the Mulches in any census record. There are no guardianship records for Ida and she was of legal age when she married–so no permission was required.