There’s the entry from what FamilySearch calls Marriage Record Volume A.

The microfilm of this marriage record did not contain the typical images of the cover or spine of the book when the “first image” is viewed. There is no “marker” indicating that a new set of records have been microfilmed as o

ne sometimes sees in materials microfilmed by FamilySearch. There is just the start of the book. The first image on the apparent roll is the first page of the last name index by first letter that typically appears in record books of this type. It is as if they unceremoniously opened the book and started filming.

The Rampley-Chaney entry (from Marriage Record Volume A) looks similar to other ones on the page and appears to have been made by the same person. The handwriting is the same throughout the page and the signatures all appear to have been written by the same person. In looking at pages before and after the Rampley-Chaney entry, it appears as if a clerk copied these marriage certifications into the record.

There is a second entry in the Ohio marriage index at FamilySearch for James and Elizabeth. Viewing the image indicates that this index entry was actually made from “Marriage Record ABC 18 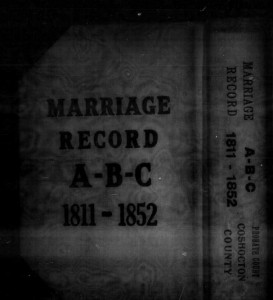 11-1852.” FamilySearch titles this record as “Marriage records and index 1811, vol A-C,” but I’m using the title that was printed on the front of the book. Local records often have titles on the front or the spine and use of that terminology facilitates the later re-access to the record if necessary.

In viewing the entries in this record, they appear to have all been hand copied at some point in time by the same person. The style of handwriting does not look like early 18th century handwriting. Because the entire book is very uniform and the time span covers 41 years, it would appear that “Marriage Record ABC 1811-1852” was hand copied from the earlier marriage register. 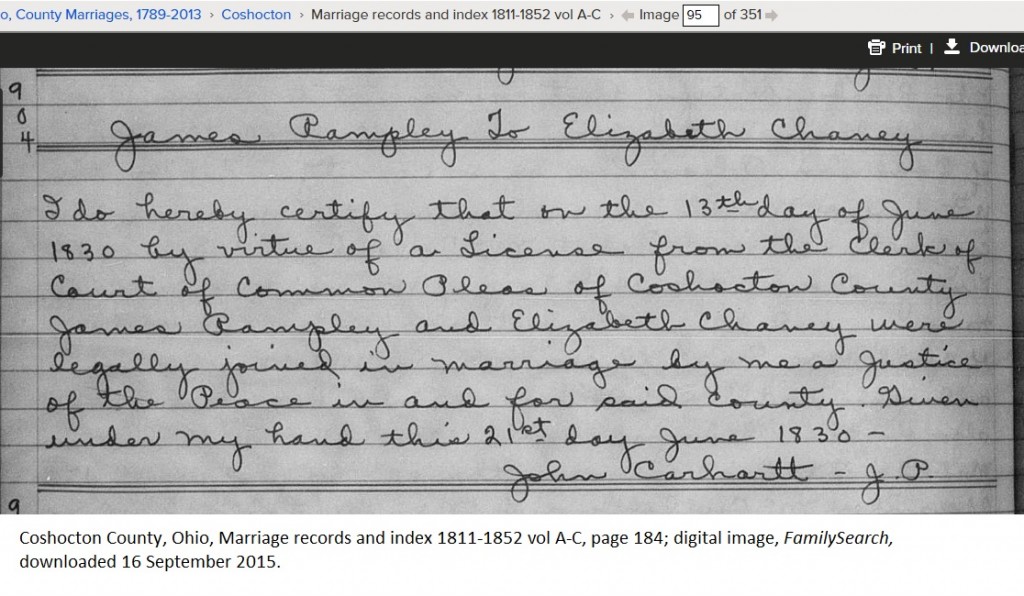 Neither of these records are the original marriage certification. Both registers contain copies. The ABC book contains a copy of a copy–making it potentially more prone to errors. However the compiler of the ABC book may have had an easier time reading the original register at the time the copy was made. The ink may not have been as faded and the pages may not have been as worn. We can’t ignore the ABC book simply because it is a copy of a copy. The transcriptionist may have had advantages that we don’t.

But we need to understand what each book it and what it is not.

We can’t analyze anything if we don’t know that.