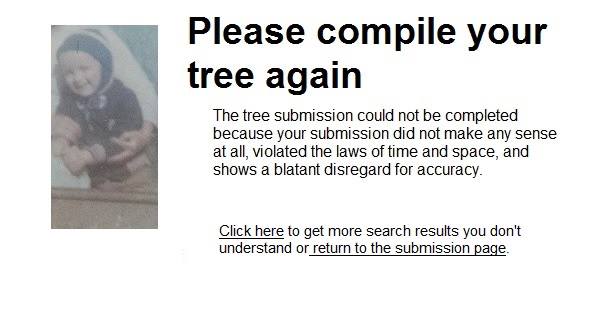 We’ve all seen them and some of us allow our blood pressure to become raised by their very presence:

It would seem that the online tree creation sites could include some programming code to prevent such mistakes from being uploaded or at least to require the compiler to acknowledge the woefully inaccurate nature of such information. They could use a nicer error message than the image included in this post. Most of the mistakes mentioned result from “file merging” and “people merging” where the matches are not closely monitored by the user and the process has been automated. Some of these mistakes simply result from careless research. A few of these mistakes  result from typographical errors. Some of these mistakes defy logic including how one person took a small village in northern Germany and moved it to Nova Scotia. Trying to understand some mistakes is a never-ending rabbit hole I prefer not to enter.

I really don’t care if you can quote the Genealogical Proof Standard or not. I really don’t care if you know what a “reasonably exhaustive search” is or not. If you think as you research, analyze what you find, are willing to learn, and are willing to admit you might have made a mistake, that’s a huge step in the direction of documenting your ancestors in the way they deserve to be documented. And chances are if you’re serious about those steps you’re probably already on your way to performing research consistent with those standards anyway.

And isn’t telling your ancestor’s story honestly what they deserve.

Let’s leave the babies after death and 100-year old men serving in the war to the zombie and vampire movies. That’s where they belong.

Note: That’s me in the picture. I’m standing in a manure wagon. I’ll let readers draw any comments from that on their own. Here’s some thoughts on “Proving Genealogical Proof.”