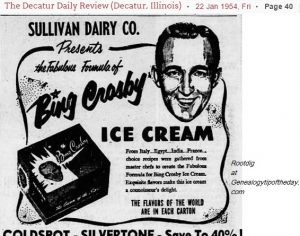 One can discover a variety of items in the classified and advertising section of newspapers. Advertisements can document a relative’s existence in  certain area, let you know when your relative’s estate was going through probate, tell you know what movies were playing when your grandparents were dating, and let you know if you missed out on buying ice cream named after your favorite celebrity.

In a much earlier era advertisements may be made for missing or found livestock, spouses who were “now responsible for their own bills,” who had letters at the post office, and similar items. In fact, it is sometimes easier to find a relative in the paid advertisements than in the “news” section of  newspaper-especially in the pre-Civil War era.

Such advertisements can be a good way to discover that a relative is the the administrator of an estate when the notice is published in a newspaper.

Don’t ignore newspaper search results that come from the tiny print of the classifieds. There may be a clue there after all.

Even if you don’t find any advertisements for ice cream.

This item came from Newspapers.com.