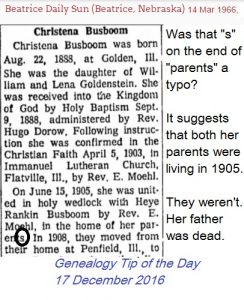 A newspaper item from 1966 was used as an illustration recently for Genealogy Tip of the Day. The tip hinged on the phrase “On June 15, 1905, she was united in holy wedlock…in the home of her parents.”

Any home Lena Goldenstein had in Champaign County was never owned or lived in by William Goldenstein. The home she was living in when she married was her mother’s home. It could also have been termed her family’s home.

But if I conclude based on this obituary that her father was living at the time of her marriage or had lived or owned the Champaign County home where Christena was married, that would be wrong.

And that’s why conclusions should be based upon a significant body of documents and not just one item.

There’s no reason not to use obituaries or another printed source as a clue.

But it is reasons like this that one must be careful reading too much into the use of one word in one document.