A sudden death is difficult. It’s especially difficult when the person is relatively young and far from home. It’s even worse when the death is an apparently violent one and the family several hundreds of miles away is notified by telegram. 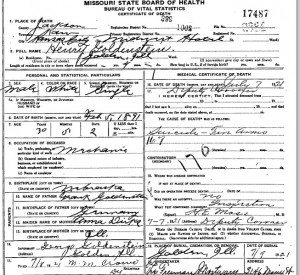 The cause of death was determined by “inspection.” There was no autopsy and according to this death certificate his body made a quick trip back to Golden, Illinois where a burial was held on 9 July 1921.

How Kansas City authorities handled his deah did not go over well with his family back in Golden, Illinois–particularly his mother, Anna (Dirks) Goldenstein.

We will see how this played out in a series of future posts.  Henry Goldenstein is a brother of my great-grandmother Tjode (Goldenstein) Habben.