I”ve actually had this 1868 marriage record for sometime. It is an easy one on which to make an incorrect interpretation.

The bride-t0-be is Francis, daughter of Conrad and Barabara Haase and in this 1868 letter they are giving John M. Trautvetter permission to marry her. It is the word written after Francis that is the problem. 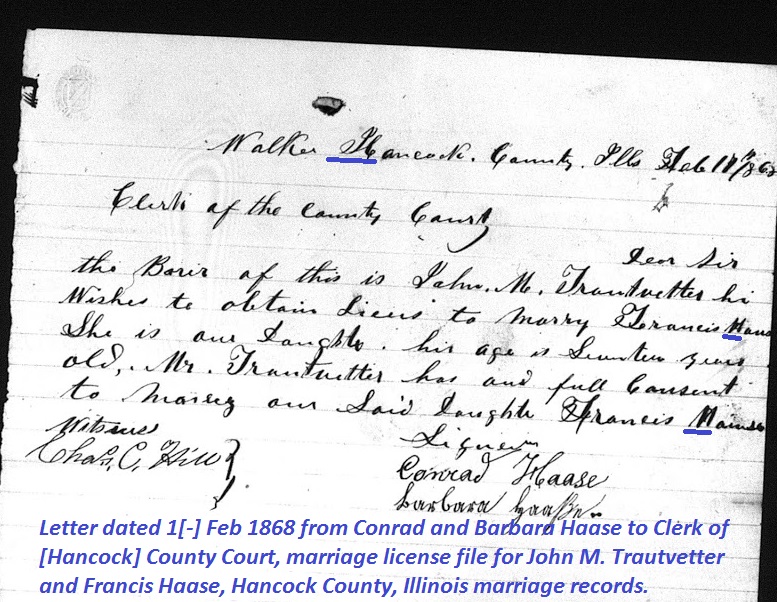 The first reference upon closer inspection appears to have been “Haus.” For the apparent non-German writing the letter (based upon the script–which admittedly may not be a correct assumption), “Haus” is a reasonable phonetic rendering of Haase. The first letter is clearly not an “M” upon comparison to the middle initial in the name of the groom, John M. Trautvetter.

It is the second rendering of her name that is the problem. 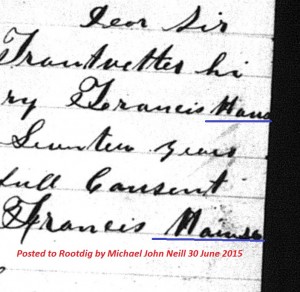 I’ve struggled over it before. The “H” in the first one can be seen to contain a loop in the middle of the two vertical lines. One could say that there’s a muddled loop in the second rendering as well.  It clearly does not look like the “M” in the groom’s name. There is an extra letter at the end of the second writing of word after her first name, but that letter could simply have been cut off of the first rendition giving it’s proximity to the edge of the page.  There could be an “i” after the “a” in the second rendering (based upon the presence of a dot). However, there are several dots in the same general area and from this scan it is difficult to determine whether it is a dot from the ink or something else on the original paper. Based upon the same general structure of the first letter in this word after Francis’ first name, I’m inclined to believe that both words after Francis refer to her last name of Haase.

These images were made from microfilmed copies of the Hancock County, Illinois, marriage records at the Family History Library in Salt Lake. My eventual citation for this document should indicate that it was not made from the actual record in the courthouse. That’s why citing what we actually used is important. If my citation indicates that I have not seen the actual record, later I can determine if I feel it’s worth looking at the original or not.