We all have them: someone who appears to have lived on Earth for only a few years. They arrived as an adult from the moon, appeared in a few earthly records, and then vanished.  They leave no other apparent trace except for mention in records in a short, narrow time frame. 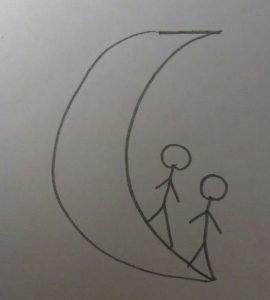 Barbara (Siefert) Bieger Fennan Haase Haase has two such moon people in her life. One of them was supposedly her “husband.”

Barbara was apparently “married” to a “non-legal” husband in Warsaw, Hancock County, Illinois, by the spring of 1856.  At that time, her husband, George Fennan, appears as guardian for her children in county court records. His Germanic signature appears on two documents in the guardianship records, one of which is on a letter asking to be relieved from his duties a short time after being appointed guardian. He appears in no other local records.

The second moon person is Lawrence Knaeble. He was apparently a tenant in an apartment attached to Barbara’s tavern in Warsaw in May of 1858 when he shoots an overly aggressive and drunk William Donahue who was a patron of Barbara’s tavern. Knaeble was convicted on a manslaughter charge but was pardoned by the Illinois governor before serving his entire sentence. His only appearance in local records is his criminal conviction by a Hancock County court.

The moon people matter because there might be something on them that leads me to more information on Barbara. She’s a German native whose origins have been difficult to research.

I need to write up and organize what I have on Fennan and Knaeble. Fennan is known to have left the local area–or at least refers to his departure in his letter requesting he be relieved of his guardianship duties. It’s possible that Knaeble never returned to Hancock County after his pardon. It’s also possible that neither of the men knew Barbara before they met in Warsaw and that there is no “clue” about her origins to be gleaned from information on them.

Unless I look on the moon. Maybe that’s where all the answers I cannot find are located.