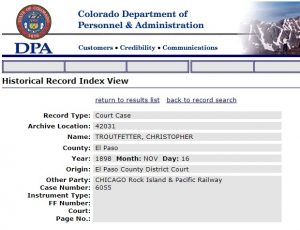 The Colorado State Archives will send copies of records mentioned in their indexes using their online request system. I received a response with a price quote for a copy of the case file. Ten days are to be allowed for copies to be received.

Stay tuned–we’ll have an update when the materials have been received.