Estate inventories of farming ancestors often list quantities of grain among the chattel items, especially inventories from the 19th and early 20th centuries. Grain has value and items with monetary value need to be in an estate inventory.

Having grown up on a farm, I’m usually familiar with a fair proportion of the items listed in the inventory.  Usually a little quick research will confirm the identity of terms with which I’m not personally familiar. And there’s always the item that was used in 1870 and hasn’t been used in over a hundred years. Identifying those usually takes me a little more work but one can work wonders with Google searches.

And then there are the soybeans.

More accurately, the lack of soybeans. I noticed there were no soybeans in the inventory of several of my Hancock and Adams County, Illinois, farming ancestors:

There were other grains listed in varying quantities. Where were the soybeans? Corn, wheat, and hay were listed in the chattel inventories. But there were no soybeans. Soybeans are a very common Illinois crop, so why aren’t they in any of these inventories?

The answer’s pretty simple: they weren’t really raised in Illinois during the time period in which these inventories were created. 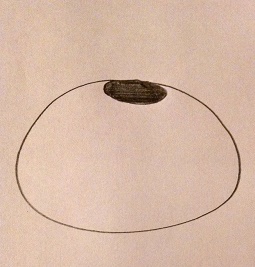 An untrained artist’s rendering of a soybean.

The Soyinfo Center‘s “History of Soybeans in Illinois” provides significant background on soybean production and a few additional references. The failure to see soybeans listed in an estate inventory during the time period of these estates is not unusual. In fact, seeing soybeans listed in one of these estate inventories would have been unusual. A look at the actual 1880 United States agricultural census schedule indicates that soybeans were not even counted in that enumeration.

Everything needs to viewed in context.

Is this Negative Evidence?

There’s not any soybeans in these inventories and that’s typical for this time period. Not finding what we do not expect to find is not negative evidence.