Ancestry.com has recently added “Social Security Applications and Claims Index, 1936-2007″ to their list of searchable databases. The description of the database includes the phrase:

I’m not entirely certain what that means. The information on the individuals in the database (49 million by the Ancestry.com count) appears to have been taken from the SS-5 card (“Application for a Social Security and Tax Account Number”). The information in this database is for deceased individuals. 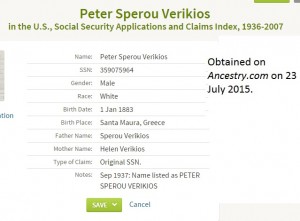 Entry for Peter Verikios. Verikios died in Chicago in 1947 and is not in the Social Security Death Index. “Original SSN” probably refers to the SS5 card for this person.

Not all entries in the database are equal. The information from Peter Verikios appears to have been taken from the SS-5 card for him (in his case it was likely self-provided and subject to all those concerns about information a person provides on themselves). There is no residential information on Peter in this database. I knew it was “him” because the date and place of birth matched a Peter Verikios I have been researching for years. I was not really surprised that Peter had a Social Security Number as he lived in Chicago and was not self-employed. 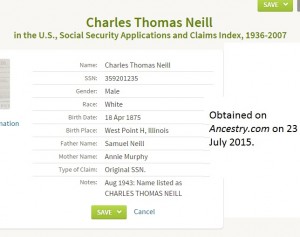 Entry for Charles Thomas Neill. Neill died in Hancock County, Illinois, in 1948 and is not in the Social Security Death Index.

I was somewhat surprised that Charles Neill had an entry. He was a self-employed farmer for most of his life (Except around 1901-1903 when he worked as a hired man for his future mother-in-law, but there was not Social Security during that time period). Many farmers during the time period Charles lived did not have social security numbers. He died in 1948 (not noted anywhere on the record at Ancestry.com).

The data on the entries comes directly from the Social Security Administration and often contains incorrect spellings, abbreviations, and other idiosyncrasies. The entry for Charles Neill lists his place of birth as “West Point, H[ancock], Illinois. 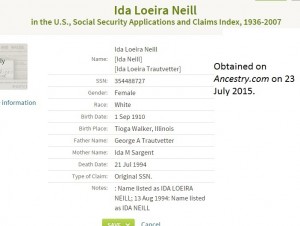 Entry for Ida Loeira[sic] Neill. Ida is in the Social Security Death Index.

The entry for Ida Neill has her middle name completely mangled, using “Loeria” for Laura. The rest of the information appears to have been correct-essentially. The birth place is indicated as “Tioga Walker, Illinois” which actually refers to Tioga in Walker Township, Hancock County, Illinois.

The database does not include every dead person who had a social security number.  Searches for the Anna Lake (whose SS-5 card is shown) were unsuccessful. 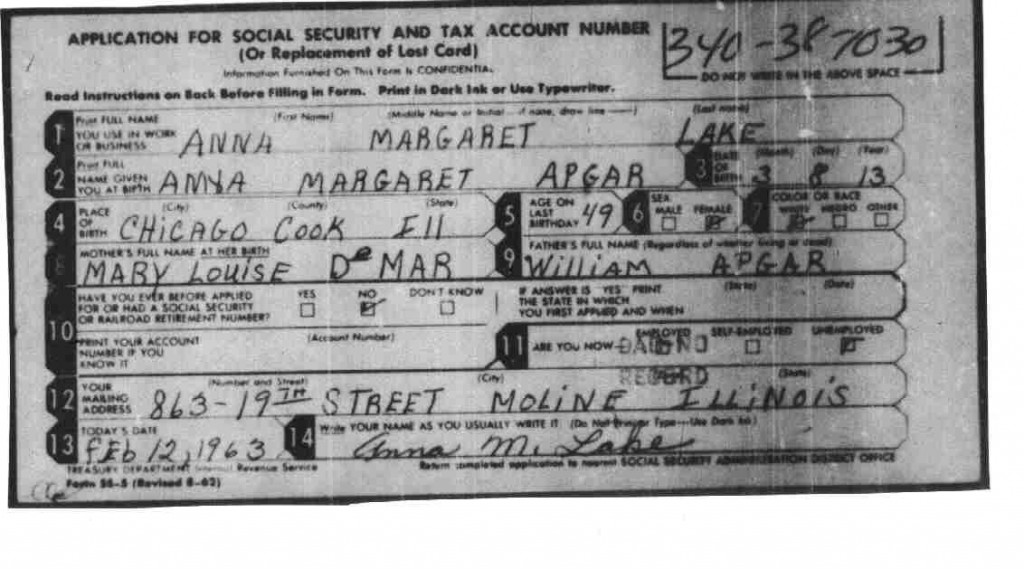 The SS-5 card shown in this post indicates that more information is on the card for the individual than what is in the Ancestry.com database.

The search interface is fairly robust as shown below. Searches can be conducted on name of the individual, their parents, and other boxes as shown below. The locations are tied to Ancestry.com‘s database of locations the use of which can be problematic given how some locations are in the database (my great uncle born in Carthage, Hancock County, Illinois, has a place of birth as “Barthage.”). Typing a small town, township or other similar location in the keyword box may be a good search approach. 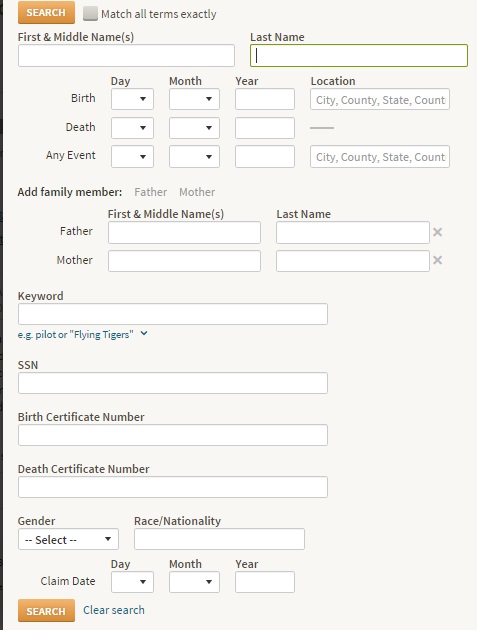