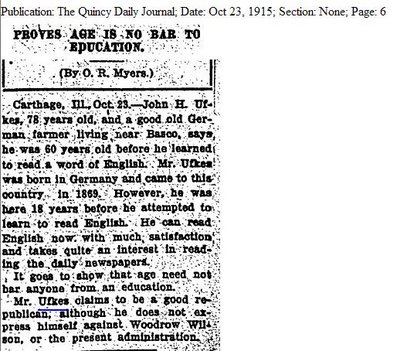 It never really dawned on me until just now. Just how literate was your ancestor?

The clipping in this blog indicates that my ancestor did not learn to read English until he was 60 years of age. By this point in time, he had

All without being able to read English. I know John could easily read German, so literacy wasn’t a problem. And there is also a very good chance that others in his neighborhood here in the United States could read English if he needed it and there probably was at least one local lawyer, bank clerk, etc. who could speak and read German.

But it makes the point. Even if your ancestors were literate, what documents did they sign that they could not read? And what if they had no one nearby to help them translate?

Just a little food for thought.

And a reminder that when John naturalized in the 1870s, there was no language requirement. Just stating a fact–we try to avoid getting political here. Although readers of the newspaper clipping will note that it indicates John indicates he was a Republican, but does not express himself against Woodrow Wilson or the present administration. Maybe John was just a little bit of a politician, like two of his grandsons.