In 1902 Philip Troutfetter was arrested in Boston, Massachusetts, after having been on the run for several years.  His travels were not over when he was arrested. He had one last trip: back to Colorado for trial.  The Denver Daily News referenced Troutfetter’s travels throughout the United States, Cuba, and Columbia.

Some of his travels have been documented with other records. Some have not.

I’m curious about the reference to his having been a correspondent in Cuba for a “New York paper” during the Santiago Campaign. 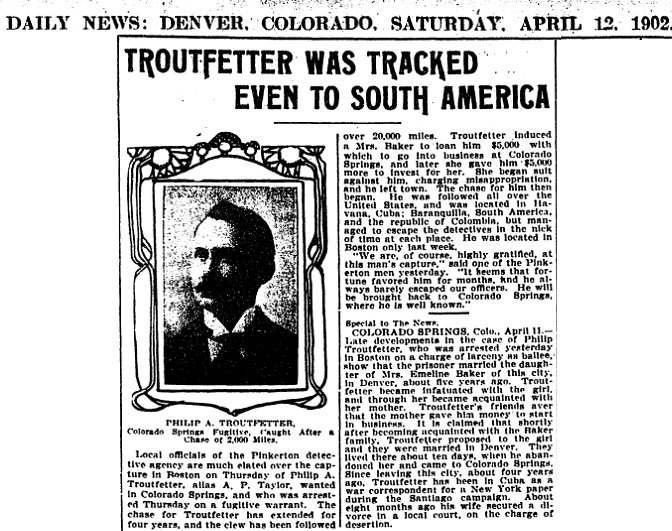 Assuming that the statement about Troutfetter is true, it might seem that it would be easy to find references to Troutfetter’s writings. After all, the last name is unusual and the time frame is narrow. Even if there were quite a few references, “Cuba” or “Santiago” could be added as keywords to further refine the search.

If Troutfetter was a correspondent, there’s some potential problems

All of this is predicated on the information in the article in the 1902 issue of the Denver Daily News being correct. It’s possible that it is not.

Before I spend too much time trying to locate Troutfetter’s Cuba writings, it might be wise to review in more detail what I have on him during this time period. There may be a clue in something I already have to help me refine the search for his newspaper writings.

This newspaper item was located on GenealogyBank.