Legal notices that appear in newspapers can be a great genealogical source. They can make researchers aware of cases they were not aware of–particularly if the newspapers are available online and full-text searchable. While legal notices do not name everyone who is mentioned in the actual court record (only the actual parties to the suit are listed–individuals providing testimony or mentioned in passing will not be mentioned in the legal notice). Because the name of the court and term of court are usually mentioned, they facilitate the location of the actual court record.

In some cases they may provide the only reference to a court case if the actual court records are not extant.

It is difficult to tell on the surface just what this case involves. However, given the number of individuals involved and the fact that several people are sued in their capacity as an executor of a will or as an administrator of an estate, I would surmise there is some sort of property dispute. Several of the individuals listed are children or heirs of John Tinsley who died in Amherst County, Virginia, in the 1820s.

Aside from the fact that court records can always contain unexpected information, there’s an additional reason I have for wanting to see this court case: James Tinsley.

Only one James Tinsley is being sued in this case, but there were two from Amherst County who were contemporaries of each other, born in the latter part of the 18th century. They were both grandsons of an Edward and Margaret Tinsley who died in Amherst County, also in the latter part of the 18th century. One James stayed in Virginia. One James moved to Kentucky. There is some debate as to which James moved to Kentucky–was it the one who was the son of John or was it his first cousin? This case may answer that question more explicitly than other records have.

The defendant James Tinsley is not an inhabitant “of this country” according to the legal notice. Several other defendants are also referenced in this same fashion. The question is just what this reference means. Is it a typographical error and the reference is to “county?” There are errors in the paper–the “Rues” in the first line of this notice is spelled “Rules” in several other legal notices in the same issue of the paper. Or is the reference to “out of country” a broader statement meaning that those individuals do not live in the state or in the immediate area? I need to see the court records to be certain what word is used and to see if a more specific residence is given.

I also need to review the 1830 census enumerations for the individuals mentioned. Care will have to be taken to make certain I have the “right” person as in some of these families there are often contemporaries (usually first cousins, but not always) with the same name. I do know that the Sally Sledd was living in Kentucky in 1830 and had since the first decade of the 19th century. 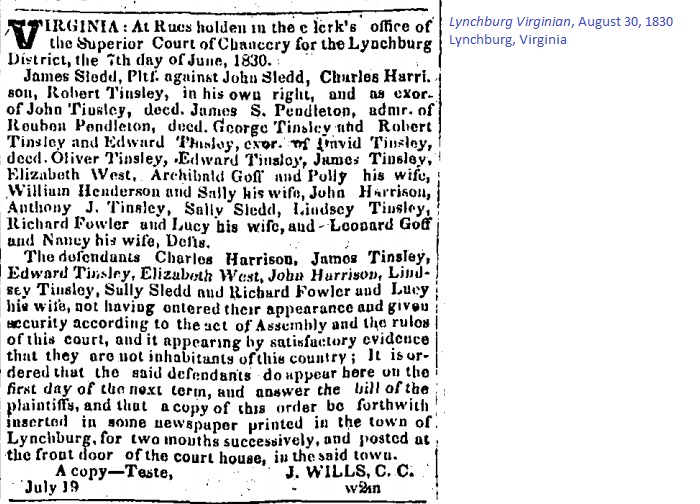 To make it a little easier, I transcribed all the names in the legal notice. It appears, based on the use of “and” and the placement of the commas, that George, Robert, and Edward Tinsley were all executors of David Tinsley, deceased. There may be two separate Edward Tinsleys being sued. Robert Tinsley is being sued in his capacity as John Tinsley’s executor and individually.

While I’m working on getting the court records–and while I’m waiting–I should review what I already know about these individuals.

This newspaper item was located on GenealogyBank.