Emmar Osenbaugh continued her October 1918 testimony by providing some family background. It’s important to remember in evaluating and using this information that Emmar was nearly eighty years old at the time of making her statement.

She gave her maiden name as Emmar Sargent and indicated that she was born in Darlington, Ontario, Canada, the daughter of Clark Sargent and Mary Lucinda Dingman. When she was eight years of age, the family left Canada and settled near Rockford, Winnebago County, Illinois.

Father was a gad-a-bout and he went off while we were living in Ill. and we never heard what became of him. 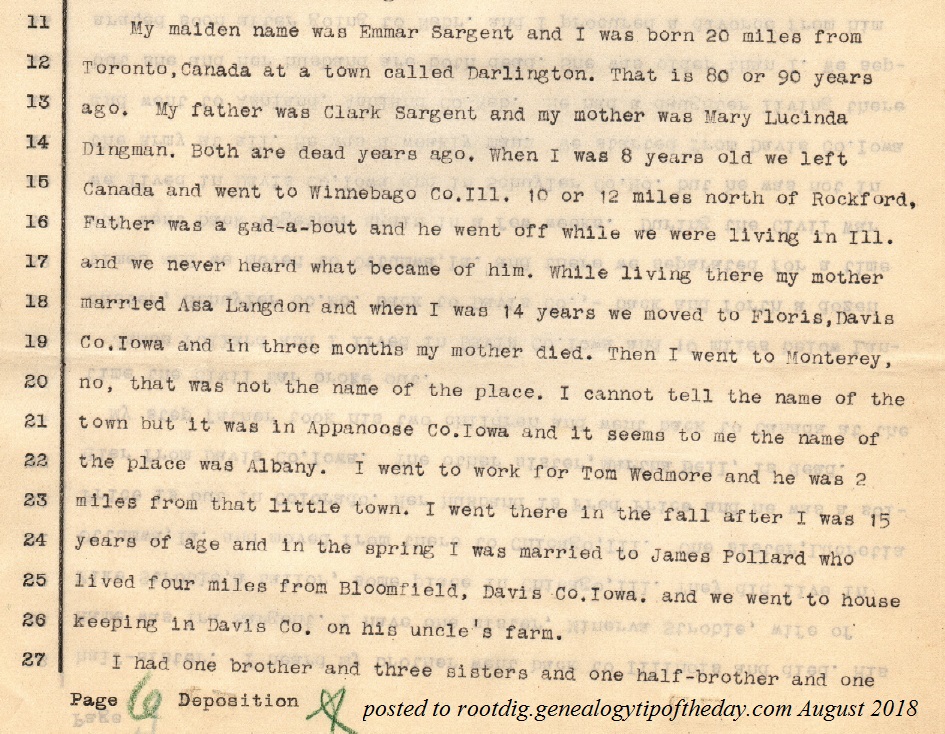 Emmar’s statement is the only document to indicate that Clark “ran off.” Other family sources (containing secondary information) indicate that Clark died in the late 1840s. Emmar indicated that her mother then married Asa Langdon (actually Landon) and when she was fourteen them moved to  Floris, Davis County, Iowa. After being in Iowa for three months, her mother died.

The family moved to Appanoose County, Iowa, where Emmar worked for a man named Tom Wedmore the fall after she turned 15 years of age.

That spring she married James Pollard of Bloomfield, Davis County, Iowa, and they went to housekeeping on a farm his uncle owned in Davis County.

Emmar then mentions her siblings.

We’ll find out more about them in a future post.