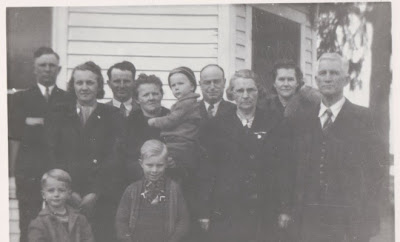 I wondered why they were all dressed up.  There had to have been some sort of  “occasion” as most of the snapshots of the Neills show the men in more traditional farmer attire (son-in-law Armin Shanks was a school teacher as was his wife Nellie) and the ladies in less formal dresses. Common sense told me it was not that all the Neills had been to church.   The attire also indicated that the picture was probably not taken in  the summer or in the depths of winter. But why were they all dressed up? This is one of the few pictures I have of the entire family in one shapshot. The other photographs from the 1920s and on do not include the entire family group.

This picture was one that was in Fannie Rampley Neill’s collection of photographs which are in the possession of a family member. The same picture was also in an envelope in her daughter Nellie’s collection of photographs. Written on the envelope was a note indicating that the pictures were taken when son Herschel had come back with his new bride. The couple had married in Texas where he was stationed during part of World War Two.

There was a second photograph including the newlyweds.

Identifying the people in the photograph also led me to believe that Herschel took the first picture (he and Mary Ann are not in it) and that Armin Shanks took the second picture as he is the only one absent from that picture.

One cannot always tell the reason why a family got together and it’s not always obvious who took the picture either. But sometimes there are clues–one just has to look. Before we found the envelope explaining why the pictures were taken, we were using my father’s birth to approximate the picture’s date (he’s the one being held by his mother in both snapshots).

My Grandma Neill (Ida [Trautvetter] Neill) would have said they were “all dolled up” for the occasion. Somehow I just can’t bring myself to use that phrase to describe my grandfather.