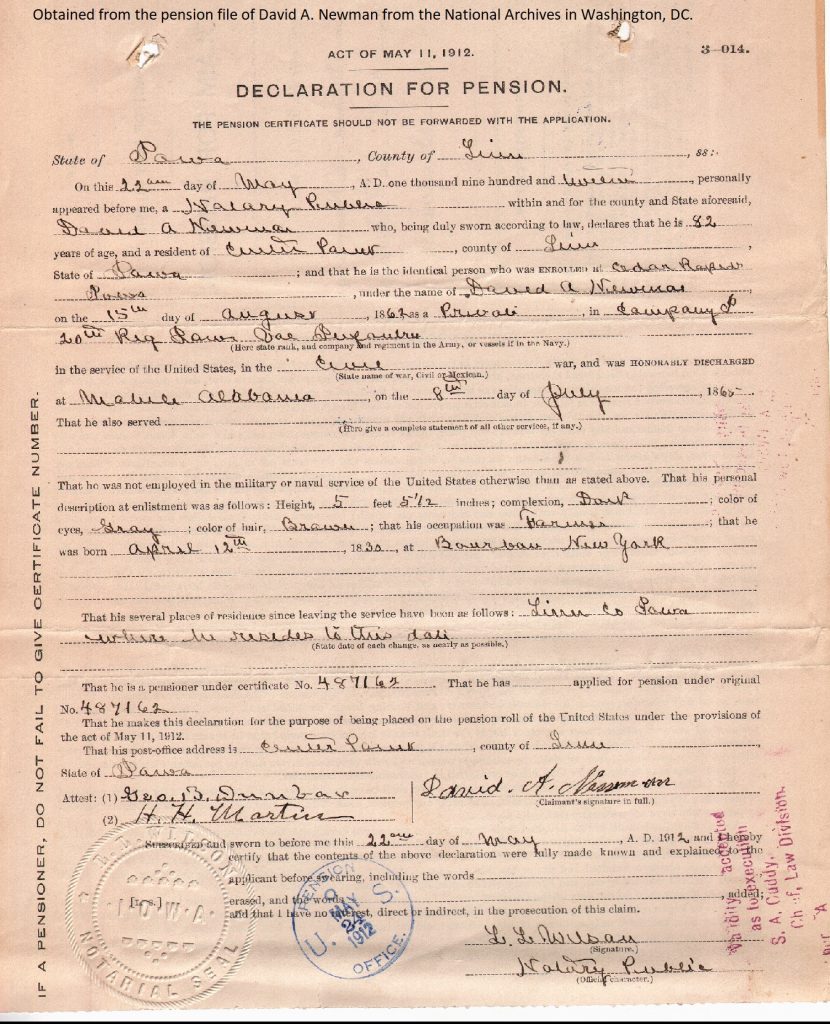 A declaration for pension made out by David A. Newman on 22 May 1912 in Linn County, Iowa, stated that he was born on 12 April 1830 in Bourbon County, New York.

The writing is clear and that’s how I’m going to transcribe it because that is what it says: Bourbon County, New York.

However it’s wrong. Of course it’s not wrong simply because I said so. Far from it. After all, it’s not a date of which I have any first hand knowledge.

On virtually every other record where David provided a place of birth, he gave the state of Kentucky. If a county was given, it was usually Bourbon. David’s parents lived in Kentucky from their 1815 marriage in Bourbon County, Kentucky, through at least the 1830 census. At some point they moved to Indiana and lived in at least two counties in that state. There’s nothing indicating they ever lived in New York. And while it’s possible, it doesn’t seem likely since every other record on David and this family indicated they were in Kentucky from 1815 through sometime in the 1830s. I don’t know why this record says New York. There’s nothing on the document to indicate where the place of birth came from and I certainly was not there to witness the creation of the declaration.

Seeing the New York reference did cause me to go back and review what I had on this family during the time period David Newman was born to Augusta and Melinda (Sledd) Newman. Nothing suggested they were elsewhere. Of course, it is always possible. It’s just not too probable.

And it’s not too probable that every other document is wrong and this one is correct. It certain is possible. But it is highly unlikely.

What’s more likely is that the reference to New York is a mistake.

I’ve seen a reverse problem in another family. In that case the relative was born in New York, but is listed in one census when his daughter indicated her father was born in Kentucky. In that case, an examination of census entries indicated that the enumerator used two letter abbreviations for many locations and had somewhat sloppy handwriting and apparently confused “Ny” with “Ky.” Their “N” and “K” letters were different but similar.

Is that what happened here? Don’t know.

David died two years after this declaration was made out. How aware was he of what information it contained? The witnesses are not close family members and would have been less likely than a son or daughter to have noticed an error. And it’s worth remembering that witnesses are testifying that David signed the document and that they knew who he was, not that any of the information contained in the statement is correct.

My transcription of the document is true to the original. I may add sic after the birth place in New York to remind myself later that it does give that state. My discussion of the reason why is best left to what I really know and that discussion needs to be clearly made separately from my transcription.

I’m fortunate that I have enough records on David that I know not to look for him in New York State.

Sometimes we are not so lucky.