There are lessons here about taking things out of context, not realizing when someone is being sarcastic, jumping to conclusions, and failing to get the entire story. It’s also easy to fall for the conclusion that is the most dramatic.

A March 1932 editorial in the Chicago Tribune references a bombing at a drug store owned by a relative, William G. Trautvetter. The editorial concludes:

The more the matter is studied, the clearer it becomes that Trautvetter was neither robbed nor bombed. He is the victim of hallucinations. No crime was committed.

The editorial is being sarcastic. There’s always a danger when using any material that one does not interpret tone or intent accurately. The author of 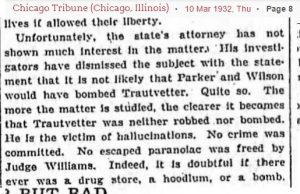 the editorial appears to be making a dig at the Cook County State’s Attorney. There were witnesses to the robbery (which included a shooting in which no one was injured) and the robbery was referenced in several newspaper articles after the fact. The bombing was also reported in the newspaper at the time as well.

We will see in future posts what brought about the editorial and the newspaper’s  rationale for sarcastically declaring that the robbery and bombing never took place.

One lesson here is that one has to read and study newspaper accounts carefully as there may be “tone” that does not quite translate into modern terms. It’s usually best to get all the facts before reaching conclusions.

Otherwise I might think cousin William was having hallucinations.