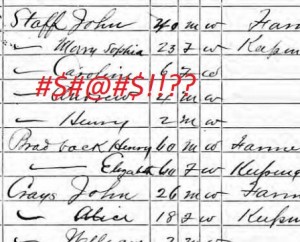 For those of you who prefer serious posts, this is the time to move on.

In reviewing a series of Union Civil War pension files, one of the affidavits indicated that the veteran’s birth was recorded in the family Bible along with the births of his thirteen siblings. Of course the other thirteen were not named in the affidavit nor were their dates of birth copied. It felt like a big tease.

Since I was home, I said one of those words that I sometimes say.

Then I realized that I need a “genealogy swear word.” A word that genealogists consider an expletive, but yet is library appropriate. That way when one is in an archives, public library, courthouse, or the Family History Library, the genealogy swear word can be said when one is faced with frustration when using or interpreting a record.

Because saying (@*#$& at the Family History Library generates quite a few looks from the missionaries.

In all fairness to the Civil War pension file that only included the date of birth of the veteran, it is worth noting that the pension application was not interested in the veteran’s siblings. Since they were not germane to his claim, there was no need to include them.

My frustration does not change the fact that records were created for other purposes besides genealogical research and that we need to keep those purposes in mind.