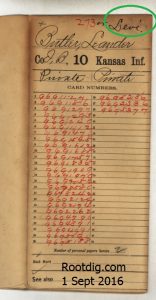 rning something about his origins–or at least clues as to where he was living at the time of his enlistment. Compiled military service records serve to document a military career and are taken for the most part from muster rolls, but there can be additional information in these files.

Sometimes genealogists are disappointed at what information the files contain–names of family members and vital dates are usually not included (unless the veteran died while in the service). Leander returned home from the war to spend the rest of his life in Missouri and Kansas. I knew there likely would not be “big clues” in his military record. I was simply looking for clues.

As mentioned in other posts, Leander’s family were frequent movers and not too much is known about the family during the 1850-1870 time period. Leander’s pension record provided little in the way of additional information on the family during this time period-other than the fact that he enlisted in the 10th Kansas Infantry during the Civil War. There really weren’t any good clues as to his family of origin in the pension.

And I obtained the compiled military service file from the National Archives.

I actually got clues that I did not expect to get. Leander was listed under three different first names in his military record. Leander was the name that was used consistently for him in his pension application.

The compiled military service record indicated that on several rolls he appears as Levi.

He is even listed as Lenard on one muster-out roll. I still need to look at the cards in his compiled military service record a little more closely as it appears he was transferred from company I to company B at some point during the war.

And the Levi references indicate company “F” as well. I’ve not gone through the history of his service and his units well enough to determine at this point exactly what is going on.

It’s relatively easy to see how Leander and Leonard could be confused. I had not thought of him being called as Levi.

This compiled military service record gave me more names to use when searching for Leander in other records.

How important they are depends upon your own individual research problem.