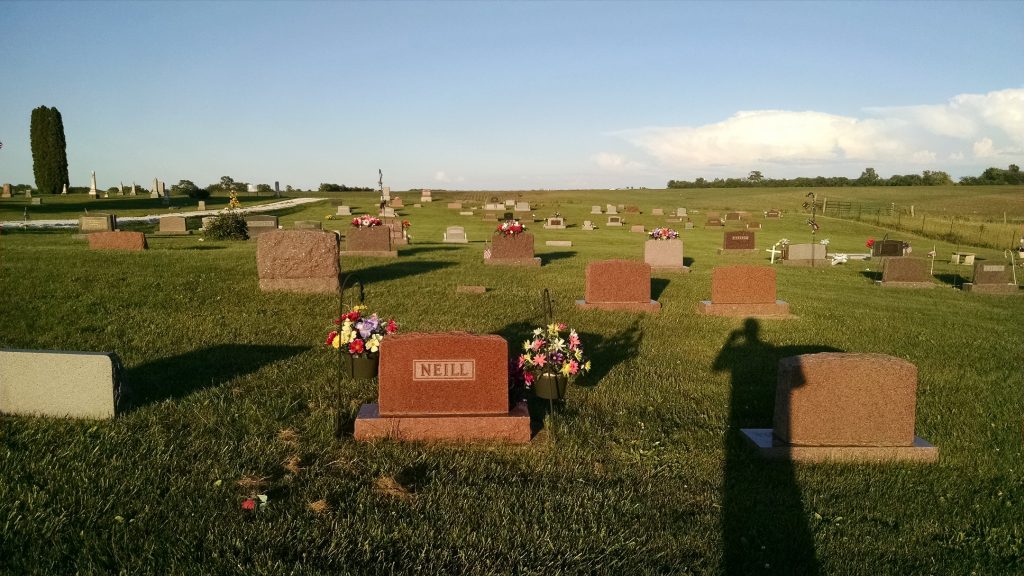 The author’s shadow graces a tombstone in a late afternoon photo taken at the West Point, Illinois, cemetery.

How Many Times Have I Been to that Cemetery?

I’m not a big fan of any sort of meme or “busywork” activity, but as I looked at the panoramic picture I took at the West Point Cemetery, I got to wondering “how many times I have been here other than for genealogical research? Had I ever been at the cemetery without writing down an inscription or taking a picture.

Had I ever been there for an actual funeral?

And I could only think of once: my grandmother’s funeral in 1994. For some reason I have the vague memory of attending another funeral there and interacting with certain relatives, but I cannot think of who it would be. I must be remembering a different funeral involving my paternal family or have convinced myself that the interaction did not take place at Grandma’s funeral. It’s just some additional evidence that memory is a fickle thing.

My grandfather died in 1968 and at six months of age, I was too young to attend the funeral. I’m not certain where I was, but I think my great-grandma Ufkes probably watched me while my parents were at the funeral. My great-grandma Ufkes always seemed so old and ancient to me, but when she babysat me she would have been in her early seventies, the same age my mother was when she died. Somehow that does not seem as old now as it did then.

Other members of my paternal family who died after I was old enough to attend funerals were not buried in West Point. My grandpa Neill’s siblings are all buried elsewhere as are my grandma Neill’s. Grandma is the only member of her family buried at West Point—it’s a Neill cemetery and many of my grandfather’s relatives are buried there.

And now I am off to think about the other funerals I have attended and where the internment was afterwards and how many times I had been to those cemeteries.

“When did you attend funerals at a specific cemetery?” might be a really good question to ask that family member you are interviewing.